A Question For Our Times


Thirty-five years ago, Andrew Grove found himself “wandering in the valley of death”, leading Intel’s huge but floundering memory chip business.  Eventually he asked his chairman, Gordon Moore (of Moore’s Law) an empowering question. “If we got kicked out and the board brought in a new CEO, what would he do?”


Moore replied without hesitation: “He would get us out of [memory chips].[1]” They did just that, overcoming pain to transform Intel into the world’s leading micro-processor company.

Intel succeeded because Grove’s question tapped into deep knowledge. It helped to overcome groupthink, status quo bias, loss aversion and a host of other well-understood social and psychological behaviours that usually leave us unable even to discuss big problems especially when change is needed. And he was blessed with an environment in which his question could be asked and answered in safety.


Most businesses face an existential crisis framed by Covid-19 and the Climate Emergency.  Moore's  deep knowledge was of the IT world and that was enough to see the new opportunity within it.  Had the opportunity been outside his experience, he would not have found a solution even though he was asked an excellent question.

To use words I dislike, he had deep knowledge of the IT 'paradigm' and was able to move Intel within it.  But had the problem needed a paradigm shift, he might well have lacked the experience and perspectives to see it.

Some will solve the current crisis within the current paradigm.  But many will need to shift outside their current paradigms, for example the travel, leisure and energy sectors.  To achieve this, leaderships will need people who think and know things that current leaders do not know and may never have thought about - or even openly despised.

So to my question.  What if leaders were to create the conditions to empower their boards and other internal fora to answer Grove's question safely, before listening - with care and respect - to no-holds-barred answers and discussing their implications?

Or can you devise a more penetrating question for our times?

Posted by Reputability at 11:01 No comments:

Humility and Self-confidence in Leaders

One wet, windy winter’s day, I took refuge in the 11th Century fortified Basilica of Valère, high above the city of Sion in Switzerland.  It’s a national treasure.  The visit revealed a gem in its Treasury.  A long-forgotten cleric from the Middle-Ages had left a Latin graffito on the wall: translated it means: “Humility is the pinnacle of wisdom and the mother of virtue”. 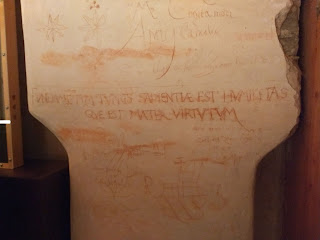 Humility has been out of fashion for a while.  It’s partly the cult of celebrity, with superficial appearances - assertiveness, drive, social graces and apparent success - eclipsing evaluation of skills, experience, character and the role of luck in track records.  It doesn’t help that those who choose leaders often lack self-awareness of their psychological biases, and an understanding of the pivotal role of character in decision-making, let alone the analytical skills and the experience needed to make good leadership choices.

When I first praised humility in leaders, my audience’s initial reaction was gently mocking.  ‘Leaders need self-confidence’, they said, implying that humility and self-confidence are incompatible.

One that seems widespread among high profile leaders in business and especially in politics is the robust, even hubristic leader whose self-confidence is like a lobster’s carapace: tough armour that protects a vulnerable interior.  These often egotistical, hubristic and insecure individuals see high pay as an endorsement of their fragile self-worth.

They can feel their very identity is at risk if their thinking is questioned, let alone if they are given news that things are not going according to plan.  It isn’t that they lack intelligence but rather that to accept they may have made an error undermines their self-esteem. So they attack.  They sack dissenters and surround themselves with sycophantic acolytes. This drives unwelcome news and insights underground so they don’t learn about problems until it is too late.  They and their organisations, whether commercial or political, become brittle, vulnerable to failure for reasons that subordinates and outsiders can often see coming years ahead.

But there is a deeper kind of self-confidence. There are equally bright and ambitious leaders who know and accept that they will sometimes get things wrong.  They understand and credit the role of luck in their successes. Echoing the Tao Te Ching's telling of Lao Tzu's wisdom from 600BC, they “consider those who point out [their] faults as [their] most benevolent teachers.”  More recently Jim Collins observed that these often self-effacing yet successful individuals deflect adulation and channel any egotistical needs away from themselves and into making their organisations great.

Their self-confidence is not a mask to camouflage insecurity but a strong edifice built on acceptance of their strengths, their limits and their weaknesses. While few welcome being wrong, these leaders are receptive of contradiction and keen to use the insights of others to remedy weaknesses and correct errors before harm is caused.  They thank their ‘teachers’ before analysing whether things are on a good track. They surround themselves with people who have different perspectives and encourage all around them to say what they really think.  The result is colleagues and subordinates who promptly pass on unwelcome news and are both competent and willing to challenge what may be errors.

Their organisations are intrinsically resilient because, through their openness to different perspectives, challenge and bad news, they gain early warning of things that may be going wrong in time to avoid or mitigate bad consequences.

The reason that graffito grabbed my attention was a recent Financial Times job advertisement by Russel Reynolds.  It described the successful candidate as one who exemplifies, amongst other traits, humility and integrity.  One swallow does not make a summer, but this is a powerful pair of character traits in a leader.  Boards - and investment managers’ governance teams - would do well to develop that line of thinking.

Author of "Rethinking Reputational Risk: How to Manage the Risks that can Ruin Your Business, Your Reputation and You"
Reputability
London
www.reputability.co.uk

Posted by Reputability at 14:37 No comments: